GRC as a cladding material is well known for its Versatility, Ease of Installation and overall Weight Savings on the structure. GRC being cement based has Excellent Durability, High Comprehensive and Impact Strength.

It is also Non-Corrosive and Highly Fire Resistant. Due to its High Quality and Aesthetic Value, the use of GRC as a cladding and facade material is rapidly increasing amongst Architects. For Contractors, it is a cost effective solution. GRC panels are custom made to suit project requirements. One of its major advantages is the ability to form different shapes and patterns when detailing bespoke panels or architectural features, as each individual element is produced from a mould

GLASS REINFORCED CONCRETE (GRC) is a composite of cement, glass fibers, aggregates, and polymers. Our unique methods of detailing, manufacturing and installing GFRC have helped make our clients and their projects, successful.

GRC is a family of materials that can be defined by the addition rate of alkali resistant glass fibre. At one end of the spectrum low dosages of dispersible fibres are used to control plastic shrinkage cracks in normal concretes (PCR). At the other end, integral fibres are used at high dosage levels to reinforce cement-rich mortars (GRC)

Most GRC products are manufactured by one of two processes-Vibration Premix Casting and Sprayed GRC. 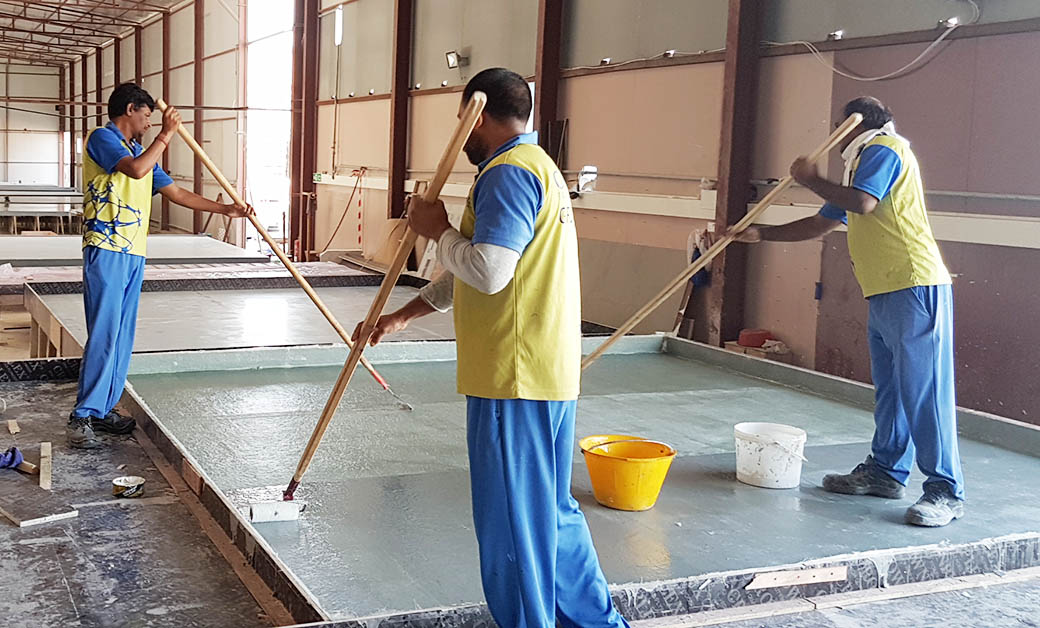 The vibration cast form is normally referred to as “Premix GRC”. Premix GRC is produced in a two-stage process. A mixt

ure of cement, fiber, sand, water and chemical admixtures is first prepared in a high-speed mixer. Fibres are added in the second stage with a slower speed. The Premix GFRC is then poured into moulds and compacted by vibration. 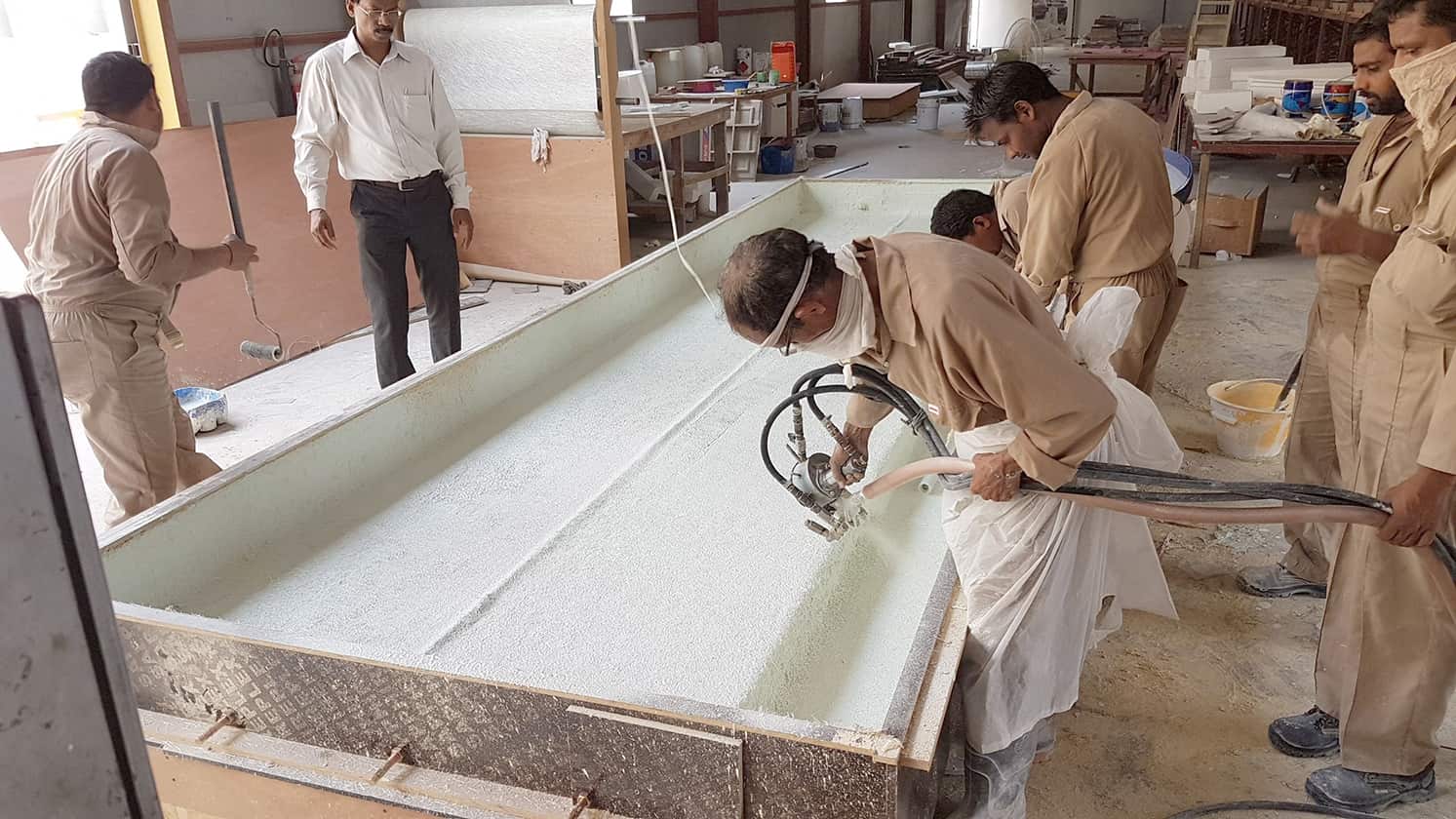 A Cementitious slurry is mixed consisting of the core material, in a High Shear Mixer. Then, it is sprayed along with Glass Fiber’s and built up in thin layers until the required thickness is achieved. It is compacted using a roller in intervals during the above process.

With our 30 years’ experience, we have completed a large number of projects with numerous satisfied clients all over the GCC countries and, are a world leader in GRC. We have a reputation for solving design and construction problems for our clients.

GRC can be used wherever a light, strong, weather resistant, attractive and fire retardant material is required. 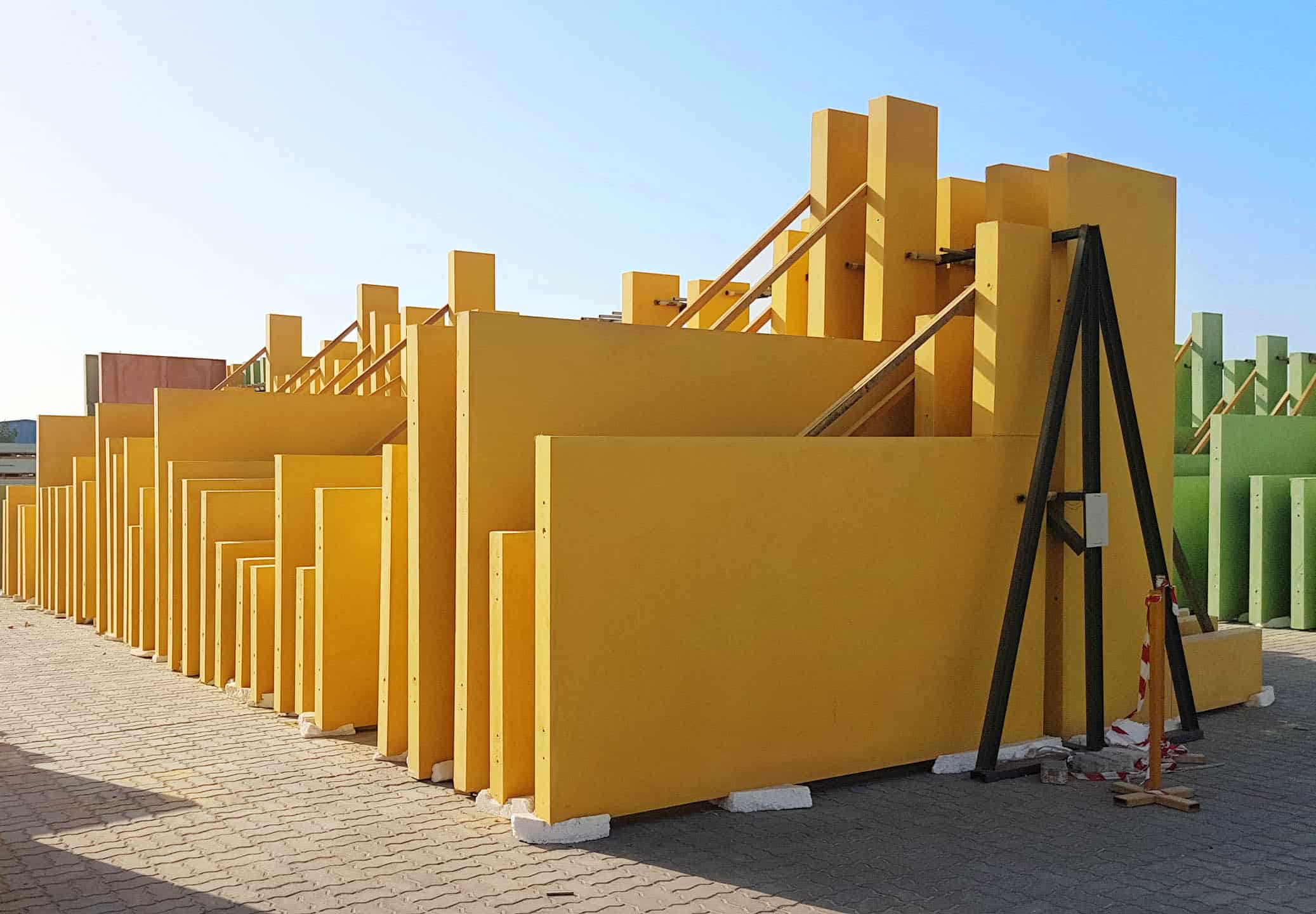 As an engineered material, the properties of GRC can vary depending upon mix design, glass content and production methods. Glass fiber used in quality GFRC has a higher tensile strength than steel. As a general rule, the higher the fiber content, the higher the strength. A typical mix with 5% glass fiber has a compressive strength of 6,000 to 8,000 psi.

Glass fiber reinforced concrete has been tested both by accelerated aging tests in the laboratory and in real life installations. GRC can be expected to last as long as pre-cast concrete. In many environments, as when exposed to salt spray or high moisture, the GRC can be expected to perform better, as there is no steel reinforcement to corrode. Since the surface of GRC is a Portland concrete, it weathers much as a quality architectural pre-cast concrete would.

GRC made of minerals and will not burn. In addition, the nature of concrete acts likes a thermal regulator when exposed to flame. GRC not only will not burn, but it also protects the materials behind it from the heat of the flame.

Relatively light in weight compared to traditional stone or terra cotta ornaments. Its installation is quick and relatively easy.

Available either with a cast in integral color and texture: limestone, precast, acid wash, etc. or as paint grade that is easily finished with virtually any paint.

Most GRC products are manufactured by one of two processes-Vibration Premix Casting and Sprayed GRC.

GLOBECLAD GRC, thin yet strong, weighs 80% to 95% less than solid concrete. This makes it easier and faster to install and reduces the load on the structure of the building. The lighter weight and stronger material also saves transport costs, allows more design freedom and, by using less material, reduces environmental impact.

GLOBECLAD GRC is strong. For GRC panels, this means it has the proven ability to withstand seismic loads and hurricane winds. For architectural elements, stronger means less chance for damage, easier to install and long lasting.

GLOBECLAD GRC lasts. It is less susceptible to weather erosion and more freeze-thaw resistant than conventional concrete. The use of glass fibers for reinforcement rather than steel means it cannot rust and can even be used under salt water and in marine environments.

GLOBECLAD GRC provides the look and feel of natural stone, architectural precast concrete, terracotta, wood or smooth panels. It allows the designer more freedom in shape, color and texture than any material.

NATURALLY FRIENDLY TO THE ENVIRONMENT

GLOBECLAD GRC has a much lower environmental impact than conventional concrete, stone or other materials. Made with minerals: cement, aggregates, glass fibers and, in some cases mineral pigments and special polymers, GRC is designed to be long-lasting and earth-friendly.

Hurricanes, floods, fires, and earthquakes are no match for GLOBECLAD GRC. Over the years it has proven itself both in the lab and in the real world.

The sand and cement are mixed dry and then the water/admixture and polymer (if used) are added. Generally a two speed slurry/fibre blender mixer is used. With this type of mixer, the fast speed is designed to create a smooth creamy slurry. This takes about 1 – 2 minutes. The mixer is then switched to slow speed and fibre in the form of chopped strand (length approximately 13mm) is added slowly. The fibre is blended into the mix for approximately 1 minute.

Once the mix is ready, it is poured into moulds which are vibrated using a vibrating table. The product is left in the mould and covered with polythene to prevent moisture loss until6 to 8 hours then demoulded.

After demoulding the products are cured under polythene sheets to maintain moist conditions for approximately 7days. Alternatively a polymer curing compound can be used as described for the sprayed process.

The strength of Sprayed GRC is generally higher than Premix GRC. 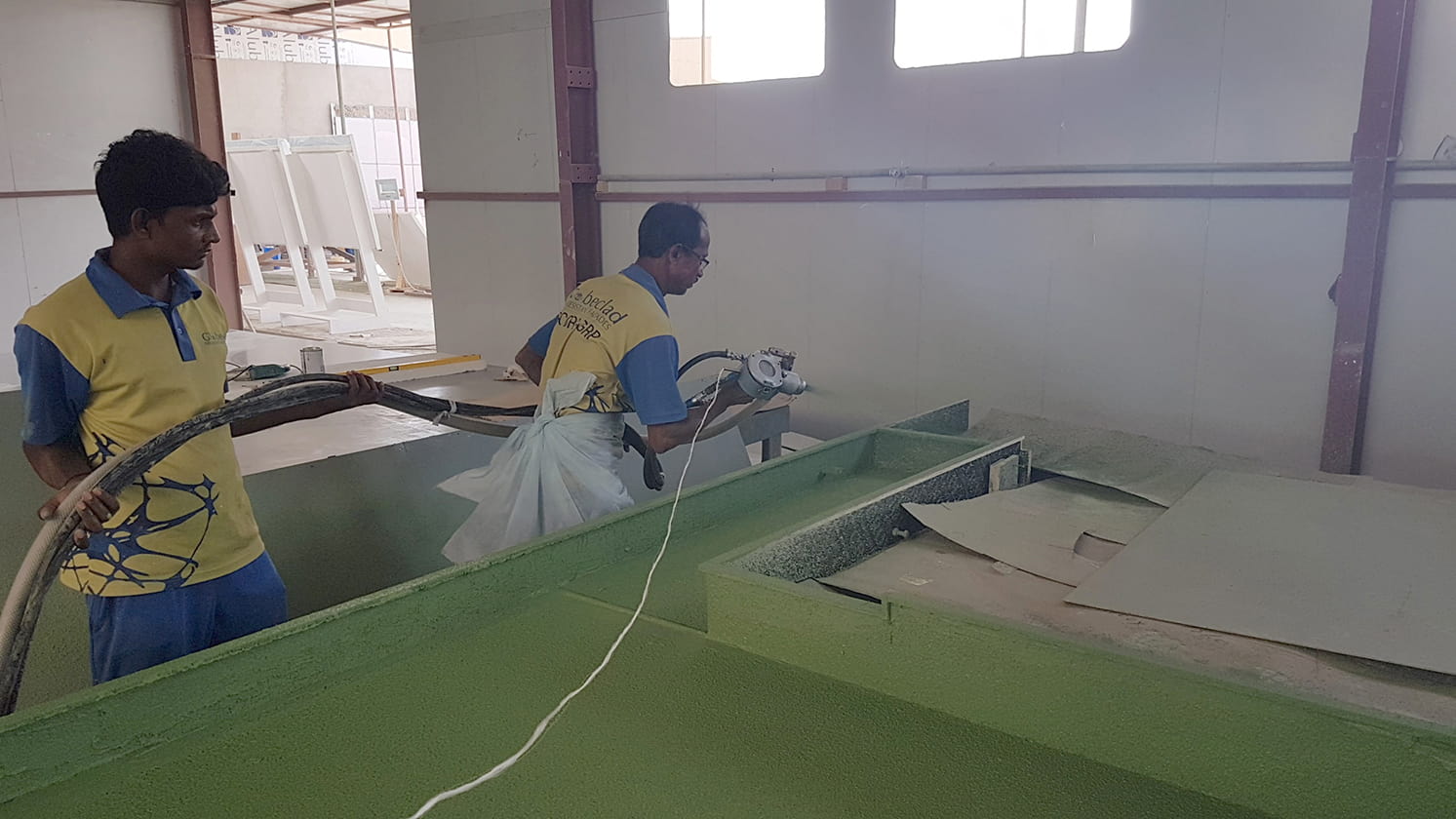 The table below shows typical values for Sprayed GRC and Premix GRC manufactured with 5% and 3% (by weight of mix) alkali resistant glass fiber.

GRC and the Environment

The main constituents of GRC are based on the naturally occuring earth oxides that are used in the manufacture of cement and glass fibres. These are not generally regarded as pollutants. Wash water from the manufacturing process contains cement and this is alkline. It is normal for factories to have settlement tanks so that solids do not enter the drainage system.

The main reasons For the reduced environmental impact of GRC compared to traditional precast concrete are:

Color is one of the most basic elements of architectural design. At GLOBECLAD we offer three basic colors; Limestone White, Limestone Buff and Smooth White, but those are not your only choices. We also custom match virtually any color. So go ahead; pick a color from a fabric sample, a pantone color or a paint chip. We will build a custom GFRC color just for you and your project. GFRC color
options include: 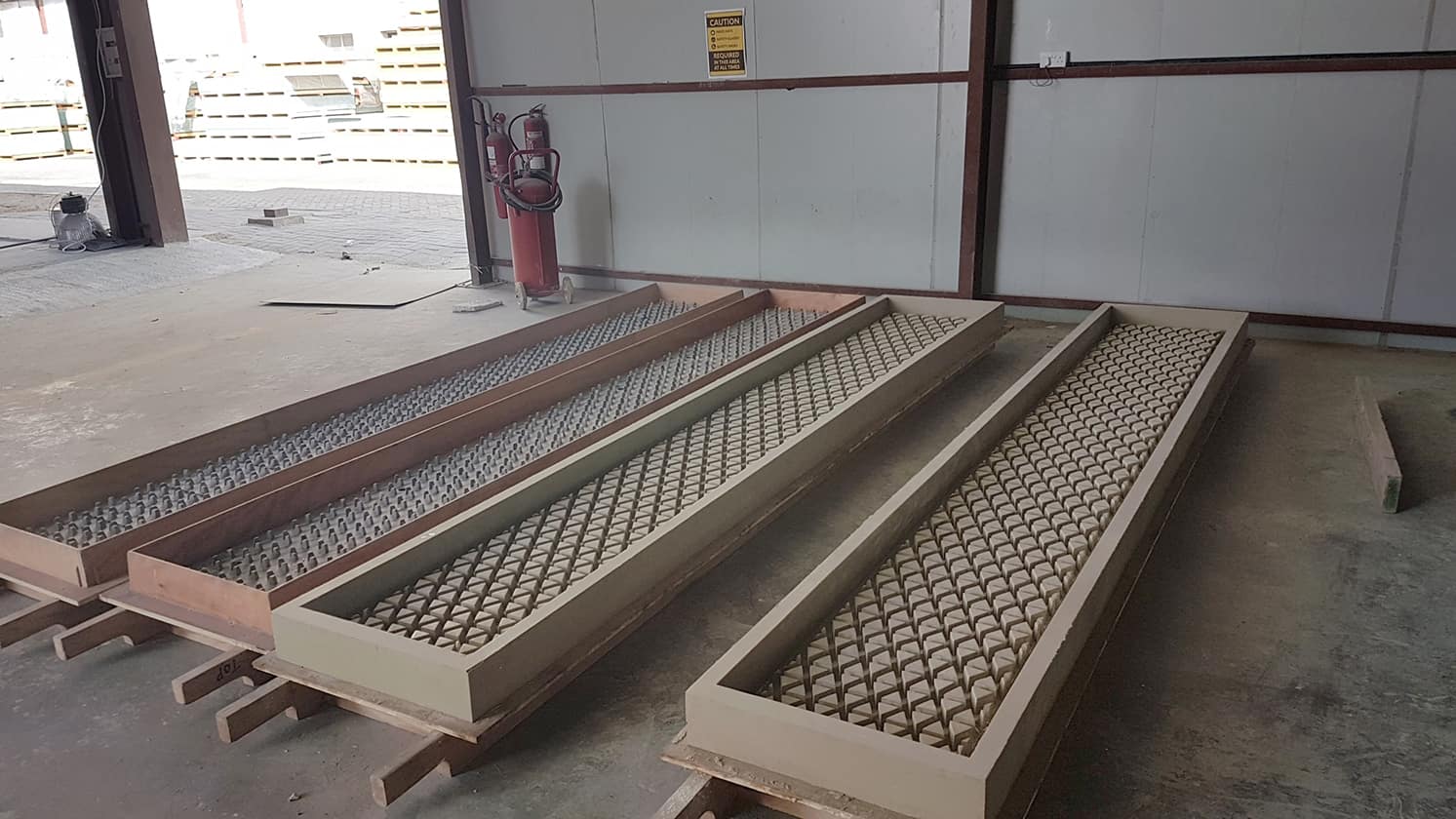 Stains: A range of concrete stains and antiquing stains.

Name your color. “We can match it”

At GLOBE CLAD we offer GFRC in almost any texture you can imagine.

Looking for a different texture? Give us a call, we can match it. 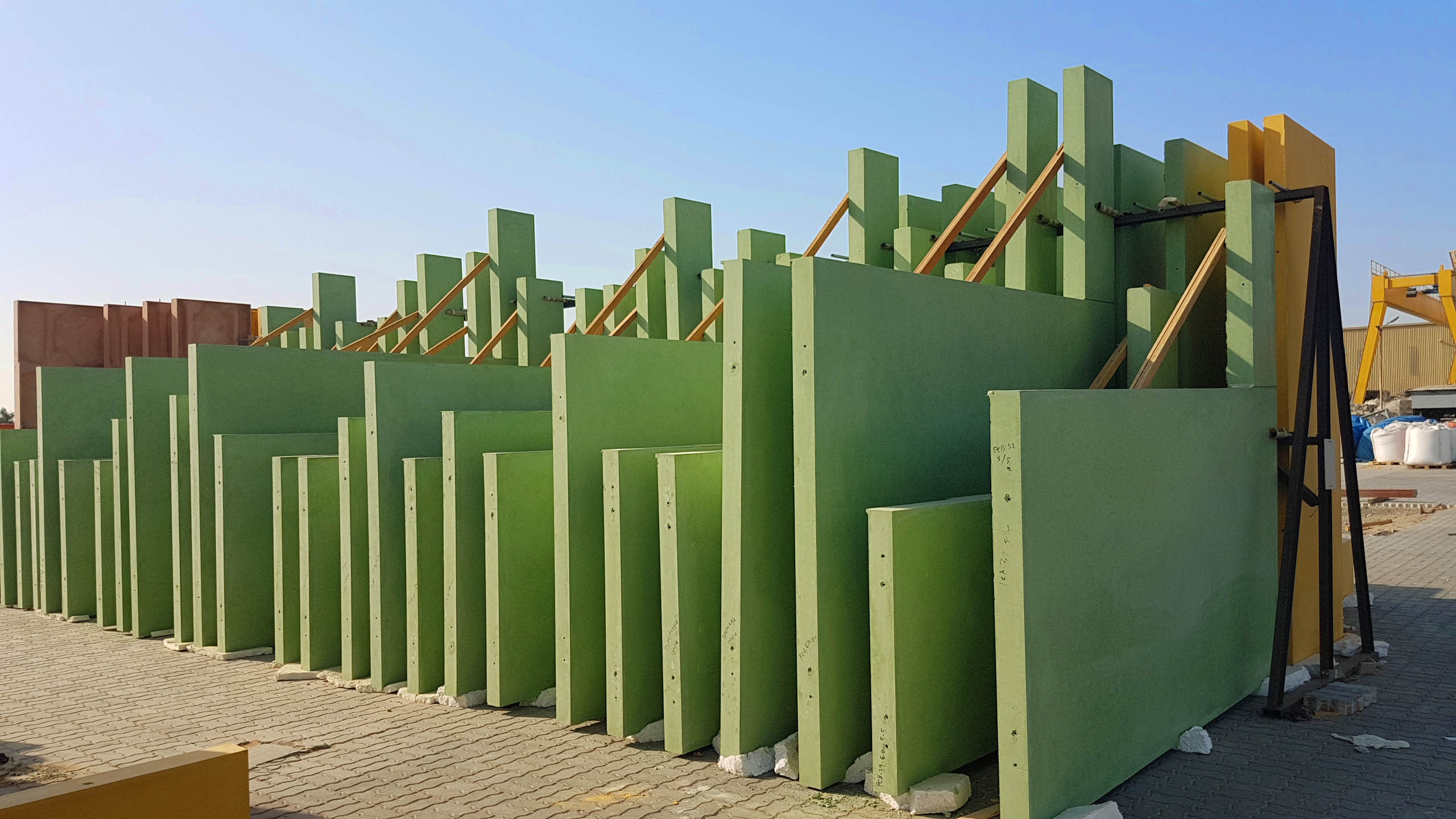